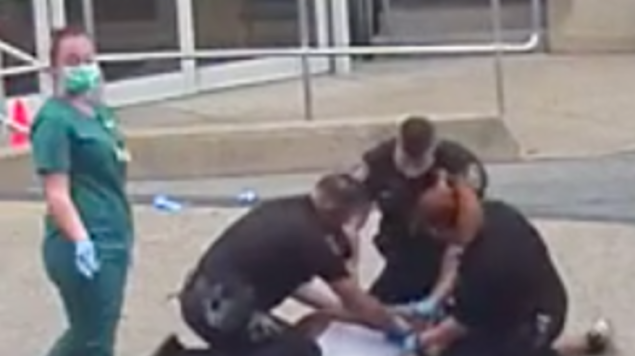 Scroll back up to restore default view.

Allentown police launched an investigation after an officer was filmed placing his knee on a face-down man who was being restrained on July 11.In a video shared widely on social media, a man can be seen lying face down on the pavement while he is restrained by three people. One officer can be seen placing his elbow and then knee on the man’s head and upper back.Allentown Police Department on July 13 released this CCTV footage of the incident, which took place outside St. Luke’s Sacred Heart hospital campus. Police said in an accompanying statement that the man seemed to be a “medical, mental health or drug and alcohol crisis” and he appeared to vomit several times, as well as struggling to walk.An altercation between the man, police and hospital staff then ensued. The man later received treatment and was released, the statement said.The viral video sparked local demonstrations, according to news reports, with protesters drawing links to the arrest of George Floyd, who died in Minneapolis after an officer kneeled on his neck for a prolonged period. Credit: Allentown PD via Storyful