>>>Black eyes, bruised limbs and concussions: Why nurses say going into work is like ‘walking into a war zone’ 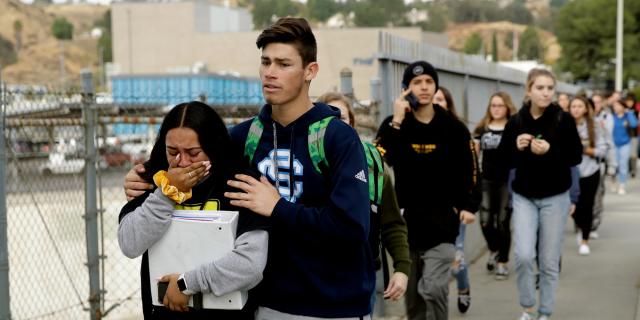 A gunman opened fire at Saugus High School in Santa Clarita, California, on Thursday morning, killing two people and injuring at least three others before injuring himself with a self-inflicted gunshot, authorities said.

Melissa Santillan, a 15-year-old sophomore, and Tyler Nilson, a 17-year-old senior who’s the student government vice president, spoke with Insider about what happened during the shooting.

Santillan told Insider that she and her classmates felt that their sense of safety at school “will forever be ruined.”

Students at Saugus High School in Santa Clarita, California, described the panic and terror they faced when a gunman opened fire on Thursday morning, killing two people and injuring at least three others before injuring himself with a self-inflicted gunshot, authorities said.

The gunman opened fire around 7:30 a.m., just as some students were starting class.

Los Angeles County Sheriff Alex Villanueva said a suspect was in custody and in the hospital. Villanueva said at a press conference that the suspect had shot himself in the head and was “gravely injured.”

“School is a place where we are supposed to be safe, and that will forever be ruined,” Melissa Santillan, a 15-year-old sophomore at Saugus, told Insider via Instagram messenger on Thursday.

Santillan and Tyler Nilson, a 17-year-old senior who’s the student government vice president, spoke with Insider about what happened Thursday morning. Neither was in the school when the shooting began, but both were on their way when they saw panicked classmates running from the building.

Students ran from the school after gunshots broke out. Some were still carrying their band instruments. 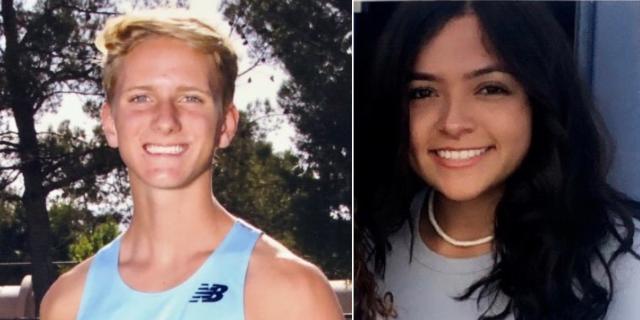 The school day is scheduled to start in waves for students — some start at 6:55 a.m., while others start their first class at 7:57.

Nilson said that when the gunman opened fire, many students were in class, but others were outside waiting for their classes to start, and some were still arriving on campus.

Nilson told Insider via Instagram messenger that he was one of the late starters because of a seminary class he attends before school.

As he left the seminary class to walk toward campus, he received a text saying there was an active shooter at Saugus.

“I didn’t believe it until a large group of students and band kids — trombones still in hand — came rushing out of the school and into the church,” he told Insider. “They had run after hearing multiple shots nearby. I pulled out my phone, and the messages were arriving by the hundreds.”

Santillan told Insider that she was driving into the school’s front gate when she saw classmates running. She was then told there was an active shooter, and she left.

“My friends at school said they heard one shot and thought it was just a bag popping. And then they heard four shots and had to run to the back fence,” she said. “All my friends get to school early, and I called my best friend, and all I heard was him running for his life, saying he was OK and he was running to safety. That will forever scare me and all my peers.” 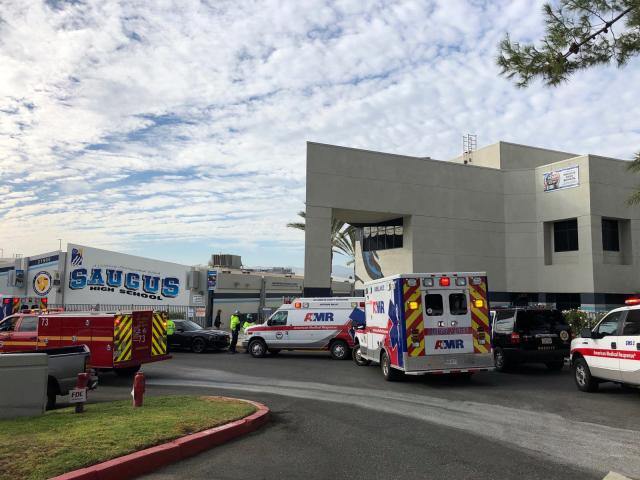 Nilson said that he, his brother, and friends returned to the church after they saw students running and were unable to leave for a while because of a police blockade.

He said he saw police cruisers, fire trucks, ambulances, and SWAT teams rush to the area, as well as a helicopter.

It wasn’t until he got home — after dropping off several friends — that he realized the gravity of the incident.

“I’ve lived in this city my entire life, and I’ve been a Saugus student throughout high school. It’s surreal to realize a tragedy could happen in my own community,” he told Insider. “Even though the extent of the injuries hasn’t been fully revealed, I know that the people in the school and the valley will band together and bounce back.”

There have been at least 30 shootings at schools that resulted in death or injury in 2019, according to the nonprofit Everytown for Gun Safety.

>>>Find the right therapist for you with new mental health platform, TryFrame.com